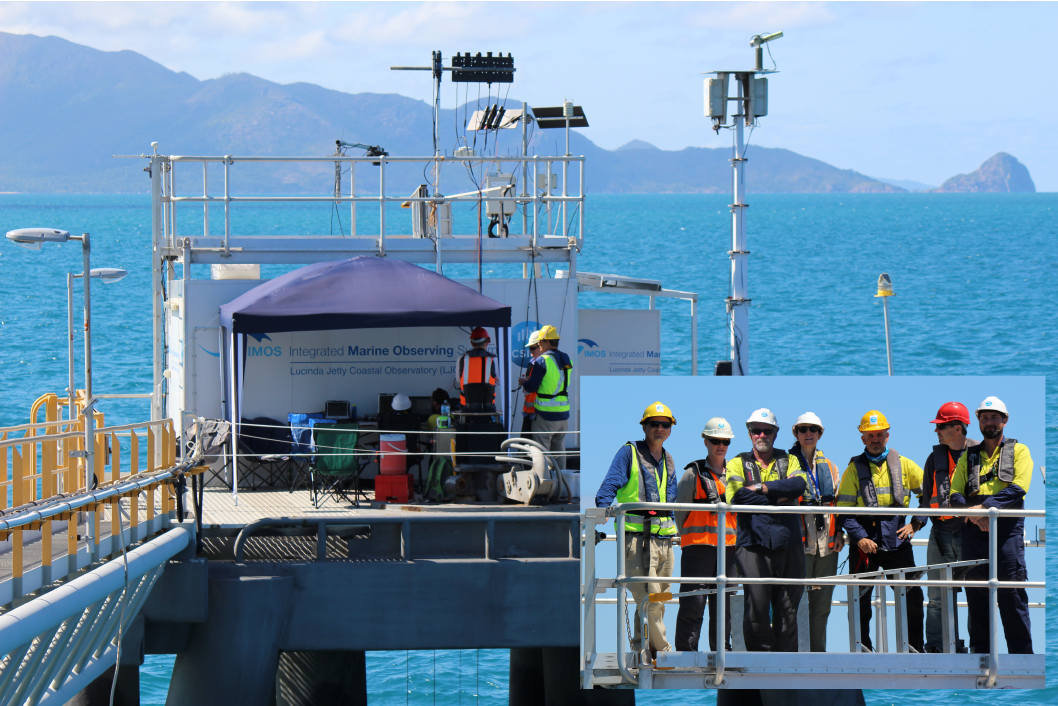 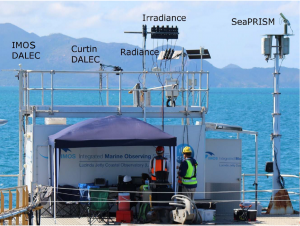 In addition to ground-sensor performance, deployment and post-processing methodologies can contribute significantly to the overall accuracy of radiometric measurements. In Australia, there are a relatively small number of geographically isolated researchers and technicians that study ocean optics. They are from different backgrounds with different perspectives and use different instrumentation. The Integrated Marine Observing System (IMOS) 1-year funding provided the opportunity for a group of these researchers to form a Radiometry Task Team in which to compare their approaches. 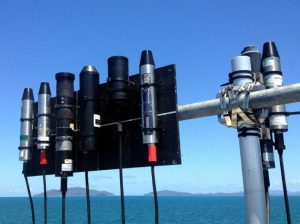 Figure 3. Irradiance radiometers lined up, with a view of Pelorus and Orpheus Islands in the background. 4 x Ramses, 2 x HyperOCR, 1 x USSIMO, and 1 x MS8 sensors are visible. Photo by M.Slivkoff.

First, the group pooled their sensors and sent them to a commercial radiometric calibration facility where lamp-based calibrations were performed for each sensor at 3 different internal temperatures encompassing the range of temperatures encountered in above-water Australian field conditions. Next, the task team inter-compared the calibrated instruments in the field at the IMOS/CSIRO funded Lucinda Jetty Coastal Observatory (LJCO) in tropical North Queensland. Situated at the end of a 5.76 km long bulk sugar loading facility, this unique location adjacent to the Great Barrier Reef World Heritage area exhibits a wide range of Great Barrier Reef water inherent optical property (IOP) throughout the year. Suspended some 20 meters above the ocean surface, the dedicated work platform has long-term IOP, SeaPRISM radiance and DALEC above water remote-sensing reflectance installations. 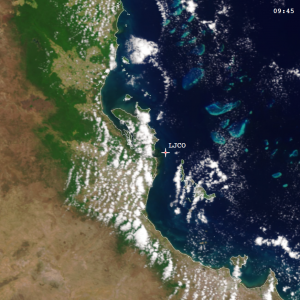 The task team assembled for a 2-day campaign (9-10 Nov 2016) in the beautiful fishing village of Dungeness; woke every morning to a view of the warm tropical mist-clad mountains of Hinchinbrook Island, looking past the invitingly glassy but crocodile-inhabited mangrove channel. After a 15-minute drive out over the jetty, the team performed consistent measurements for each of the radiance and irradiance device types, and two integrated DALEC above water reflectance systems and the autonomous SeaPRISM (Figs 2 and 3). The tropical solar zenith angles approaching one or two degrees at noon allowed observations of the cosine behaviour of the irradiance sensors over a large angular range.

Sky conditions were nearly ideal for the 2-day sampling period, with only a few wispy clouds in the morning, rapidly burning off in the hot tropical sun. The mornings were typically still and very humid until a sea breeze system developed, bringing wind speeds of 10 – 15 knots as measured by a permanently installed Vaisala Weather Transmitter (WXT520). 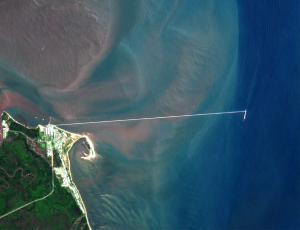 These hot conditions ensured that all sensors that recorded internal temperatures were reading 35+ degrees Celsius; far hotter than typical temperatures factory calibrations are performed at. Fortunately, pre-deployment calibrations were performed for all instruments at these elevated temperatures, so suitable instrument responsivities were applied to field data in order to achieve improved radiometric accuracy.

Measurements were occasionally perturbed by curious fishermen chasing the large fish which aggregated under the LJCO pylons, however this provided the team with occasional and often welcome breaks. Upon completion of the daily work, members of the team enjoyed supporting the local fishing industry by dining on a fine selection of food and rehydrating with local beverages.

The field deployment was an excellent chance for the often regionally separated researchers and technicians to meet, compare stories, and discuss methodologies and other technical considerations pertinent to ocean colour radiometry. With the ongoing processing and analysis of the datasets acquired in this study, the community is learning more about the experimental uncertainties and resultant confidence which can be placed in using field radiometers to validate aerial and satellite-based ocean colour remote measurements. 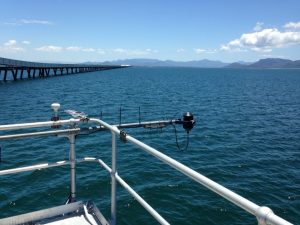 Figure 6. View of Lucinda Jetty towards Hinchinbrook Channel and the mainland. Photo by M. Slivkoff. 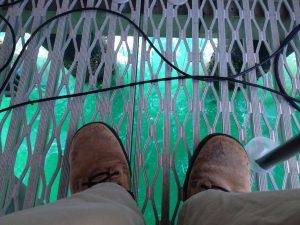 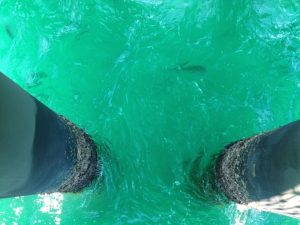 Figure 8. Many edible large (~1m) scaled particles circled the pylons for the duration of the experiment.  Photo by M.Slivkoff.