University of Tartu (UT) was founded in 1632 by the King Gustavus Adolphus of Sweden and is one of the oldest and largest universities in Eastern Europe. Today, UT belongs to the top 1.2% of world’s best universities by ranking 314th in the QS World University Rankings 2018. According to the Essential Science Indicators (ESI) database, the University of Tartu has reached the top 1% of the most-cited universities and scientific institutions in environmental sciences and ecology, clinical medicine, plant and animal science, and chemistry. A total of 42 UT scientists belong to the top 1% of most quoted scientists in the world. Approximately 14,500 students (including over 1000 international students from 70 countries) at UT represent 28% of all higher education students in the country, and with a staff of 3,500 – it is one of Estonia’s most important employers. More than 1,450 of students are doctoral students in 35 doctoral study programmes. Furthermore, between 2006 and 2011, UT conferred 60.9% of all PhDs in Estonia (632 of 1,038) and between 2007 and 2012, UT produced 51.7% of all academic/research publications in the country (5,309 of 10,259). Budget volume of 142,6 million euros in 2017.

Tartu Observatory (TO) is a research and development institute established in 1947. Since 1st January 2018, TO is merged with the University of Tartu as a sub-institute. TO is the leading centre of space research and technology in Estonia. The research areas of TO are Earth observation, space technology, cosmology, and stellar physics. TO has been active in remote sensing for several decades, being one of the leading institutes of the Baltic region in the field of Earth Observations. TO has participated in numerous Soviet Union space missions, primarily via instrumentation development for Earth observation. TO has been in active co-operation with the European Space Agency (ESA) since 2011. In 2016, just few months after Estonia became a full member of ESA, TO became the first institution in the country that was awarded with the open tender ESA contract and is now in the lead of the FRM4SOC project. TO has been a partner in the Meris Validation Team (MVT). At present TO is an active member of the Sentinel-3 and Sentinel-5 Validation Teams, and contributing to the Sentinel-2 validation activities. 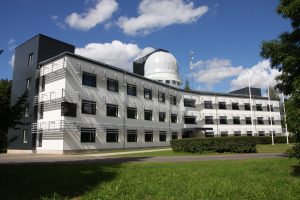 The main building of Tartu Observatory.

There are 96 employees in TO, including 73 researchers and 18 support staff and 5 visitor centre personnel. Number of employees in full time equivalent is 64,38, including 48,18 researchers. Proportion of female researchers is gradually rising and was 27,4 % of the researchers on the year 2015. The annual turnover of TO in 2015 was 2 350 000 EUR.

Tartu Observatory (TO) is the leading centre of astronomical research in Estonia, also possessing an internationally acknowledged competence in remote sensing of natural environment. Tartu Observatory research strategy brings together scientific and public goals. This enables to respond to the challenges that modern technology, political situation and economic needs create. The principal area of activity of TO is the research and experimental development on natural sciences to promote science in the fields of astronomy, remote sensing and space technology, provide research-based services in these areas, be a reliable partner in the international networks, train young scientists and extend the natural-scientific worldview. Here meet the high competence of internationally recognized senior researchers with splendid enthusiasm of young scientists to find solutions for new challenging research questions.

TO has a cooperation with European Space Agency in the field of remote sensing being a partner in ESA PECS projects ORAQUA (Developing services based on optical radiometry applications for aquatic environment in remote sensing) and QUALITY (Instrument for the volume scattering function of water). TO is a partner in Meris Validation Team (MVT) and Sentinel-3 Validation Team (S3VT) projects, also a contributing partner in EMRP project Metrology for Earth Observation and Climate (MetEOC2).

In space technology, TO has experience with FP7 projects NANOSAT (Utilizing the potential of nanosatellites for the implementation of European Space Policy and space innovation) and ESAIL (Electric Sail Propulsion Technology), as well as with ESA PECS projects “Technology demonstration for space debris mitigation and electric propulsion on ESTCube-1 student satellite” and “European Student Earth Orbiter — Optical Payload”. TO has already present internal links for development of innovative combination of these novel technologies for Earth Observation, however networking gaps and deficiencies in specific expertise areas need to be overcome in cooperation with internationally leading counterparts for improvement of the global impact. 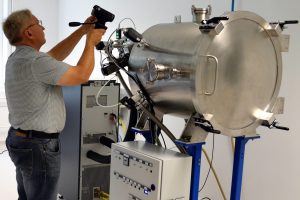 Tartu Observatory has modern, well equipped facilities for research work, an excellent visitor centre and new laboratory complex. In 2012, a new laboratory complex at the premises of Tartu Observatory has been established for development and testing of new technologies including stations for development, prototyping, and assembly; facilities for climatic, thermal-vacuum, vibration, and electromagnetic compatibility (EMC) testing; workshops for mechanical construction and repair works.

The laboratories have independent and automatic control for temperature and humidity. Special conditions as electrostatic discharge protected environment (ESD), anechoic chamber, and cleanrooms (EN ISO 14644 Class 8) have been established. Three rooms in cleanroom environment with total area of 100 m2 are available for optical measurements, where permanent setups for radiometric, photometric, spectral, and angular sensitivity calibrations are installed. Optical laboratory includes passive damping setup tables, one of them on separately built foundation for vibration-free measurements. 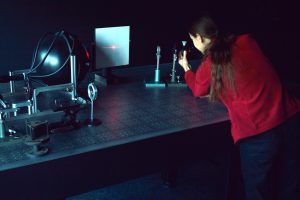 The key elements of the existing laboratory equipment for establishment of the spectral irradiance scale include: 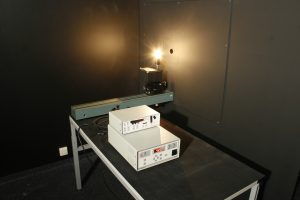 In order to assure and demonstrate the reliability of the calibration services, the quality management procedures are being developed and applied. For establishment of the metrological traceability of measurement results the reference instruments are calibrated regularly at National Metrology Institutes or accredited calibration laboratories (NPL, UK; MRI-MIKES, Finland; Metrosert, Estonia). The stability of the reference standards and measurement instruments is regularly monitored in the intermediate period of subsequent calibrations.

Regular calibration and characterisation of several common types of radiometers used for OCR (e.g. TriOS, TACCS, and WISP) is performed at the laboratories of TO. A special study for characterisation of the OCR radiometers for quantification of the effect of stray light and the possible methods for its correction is in progress (Ansko, I. et. al. Intermediate report to MVT. 2015).

PhD. Riho Vendt is highly experienced in quality assurance of tests and measurements. He has worked almost 20 years for the National Metrology Institute of Estonia (Metrosert, 1994-2013) being responsible for the national standards for thermometry (2004-2012). He was the responsible person for the testing campaign of the first satellite of Estonia, the ESTCube-1 (2012-2013). He was a member of the Consultative Committee for Metrology at the National Accreditation Board (2000-2013), a member of the TC-Therm (Technical Committee for Thermometry) at EURAMET (European Collaboration in Measurement Standards) as the National Representative for Estonia (2002-2013). He has been an active Assessor of Quality Management Systems since 2004. Participated in ESA PECS project ORAQUA (Developing services based on optical radiometry applications for aquatic environment in remote sensing). Partner in MVT and S3VT. Contributing partner in EMRP project MetEOC2. Riho Vendt is leading the establishment of new testing facilities at TO. Role in the project: WP700 Project manager, WP600 manager.

PhD. Joel Kuusk has experience in designing and characterization of vegetation remote sensing instrumentation for measurement of spectral and angular dependence of forest reflectance from low- flying airborne platforms. He has extensively studied instrument parameters affecting the measurement results, e.g. temperature effects, stray light, nonlinearity, angular effects. Although his background is vegetation remote sensing, the issues with instrument calibration and characterization are similar for ocean colour measurements. Role in the project: WP302 manager, scientist of WP301/303/600.

PhD. Viktor Vabson is highly experienced in different fields of tests and measurements. He has worked 25 years in the field of metrology, at the National Centre for Metrology (1995-2000) and at the Metrosert Ltd (2000-2015) participating in establishment of first national measurement standards and being responsible for the national standards for mass (2000-2015). From 1977 to 1991 he has worked at the Institute of Physics studying semiconductor materials and devices, technological processes, conducting electrical and optical measurements, low-temperature measurements, has used lasers, spectrometers, cryostats etc. He was a Member of the TC-Mass (Technical Committee for Mass and related quantities) at EURAMET (European Collaboration in Measurement Standards) as Representative for Estonia (2002-2015). He has been a Technical Assessor of EAK (Estonian Accreditation Body) since 2004, and for FINAS (Finnish Accreditation Body) since 2012. He participated in a number of projects in the field of inter-comparison measurements, for development of metrological infrastructure, and for the national mass standard.
Role in the project: WP302 Task leader, scientist of WP301/303/600 (metrological review).

Ilmar Ansko, Senior Engineer in the Department of Remote Sensing in Tartu Observatory, Estonia. MSc in Physics from the University of Tartu (2005). Scientific background: optics and spectroscopy, optical radiometry and related topics. Working experience from University of Tartu (2001-2013) and Tartu Observatory (2003-present). Participated in ESA PECS project ORAQUA (Developing services based on optical radiometry applications for aquatic environment in remote sensing); partner in MVT and S3VT. Contributing partner in EMRP project MetEOC2. He will be responsible for radiometric calibration and intercomparison taking place at Tartu Observatory. Role in the project: engineer of WP301/302/400.

Martin Ligi is a PhD student in Tartu Observatory. His work has been related to OCR since he started his BSc in Tartu Observatory. He has conducted fieldwork campaigns in Estonia and has been part in bigger international campaigns on the Baltic Sea and the Black Sea. During his work, he has been collaborating more closely with our partners from Stockholm University (SWE), SYKE (FIN), Brockmann Consult (GER), Water Insight (NED) and Estonian Marine Institute (EST). His work has been concentrating on reflectance data and now also with inherent optical properties. Role in the project: scientist of WP400.

Tiia Lillemaa, project manager in support services of Tartu Observatory. She is highly experienced in design and ordering of promotional material for different kind of activities since 1997. She have organized scientific conferences (latest ones are IAU308, TSTC2014, IUFROLE2015), seminars, training events etc., designed webpages and several publications. She is also experienced in administration of FP7, H2020 and other projects since 2008. Her main responsibility within the project is dissemination of project results – management of webportal and composing of high-quality booklet for public outreach purposes. Role in the project: WP 100 manager.

PhD. Anu Reinart. PhD in Environmental Physics in 2000 from University of Tartu. Performed a post- doctoral study in Uppsala University Department of Limnology as Marie Curie Fellow and projects by Swedish National Space Board. Since 2005 in TO as a Senior Research Fellow, and Director of the institute since 2010. She has experience in leading six international collaboration projects. Leading national GMES Expert Team. Estonian Representative in EU Copernicus User Forum. Group leader – scientific topics cover remote sensing of water bodies as well as development of methods and instrumentation. Participated in ESA PECS project ORAQUA (Developing services based on optical radiometry applications for aquatic environment in remote sensing). Partner in MVT and S3VT. Contributing partner in EMRP project MetEOC2. Role in the project: scientist and consultant.

Marge Kliimask is a Certificated Consultant (Member of Estonian Consultants’ Association) and she has experienced an analysis of project’s development plan, change management, contractual matters, public procurement. In TO she has been engaged in administration of EU projects’ on modernizing the general infrastructure of observatory, small-scale research infrastructure and research apparatus and equipment. Role in the project: WP700 Contract manager.