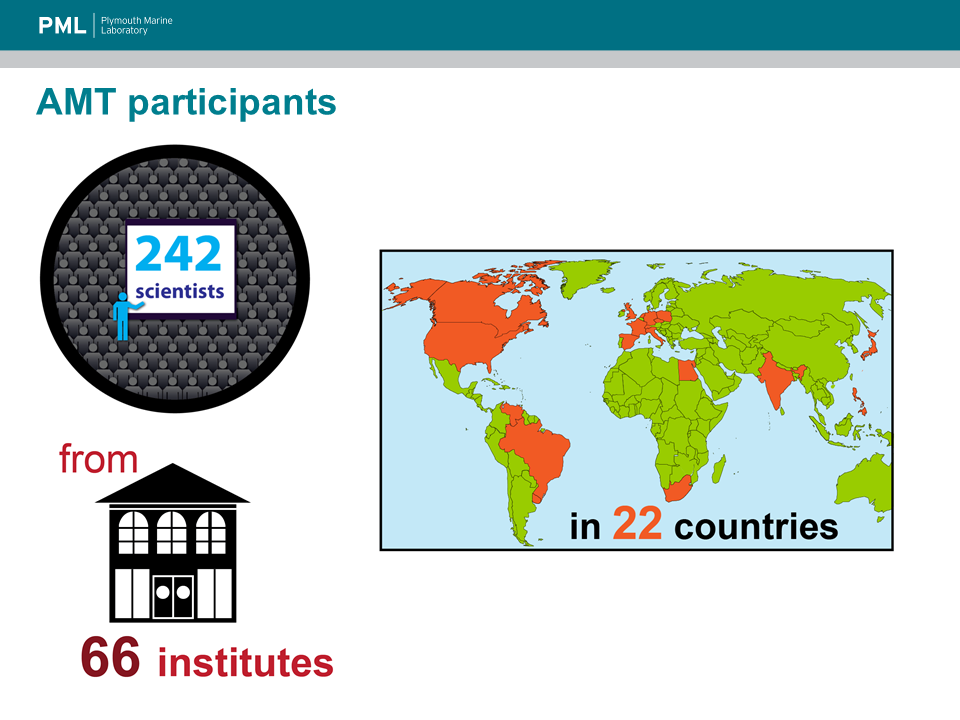 The Atlantic Meridional Transect (AMT) has been operated by the Plymouth Marine Laboratory (PML) in collaboration with National Oceanography Centre (NOC) Southampton for the past two decades. The cruise is conducted between the UK and the sparsely sampled South Atlantic during the annual passage from October to November of a NERC ship (RRS James Clark Ross, RRS James Cook or RRS Discovery). The transect covers several ocean provinces where key physical and biogeochemical variables such as chlorophyll, primary production, nutrients, temperature, salinity and oxygen are measured. The stations sampled are principally in the North and South Atlantic Gyres, but also the productive waters of the Celtic Sea, Patagonian Shelf and Equatorial upwelling zone are visited, which therefore offers a wide range of variability in which to conduct FICE for the FRM4SOC. 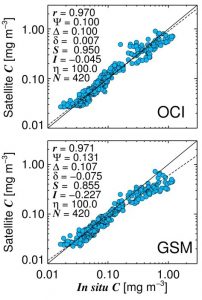 There are few calibration / validation sites in the blue water oligotrophic gyres of the global oceans, because of the cost of accessing and maintaining measurement platforms in such remote locations. The NOAA moored buoy MOBY (off Hawaii) has been used during the US Sea viewing Wide-Field-of-view Sensor (SeaWiFS), Moderate-resolution Imaging Spectroradiometer (MODIS) and Visible Infrared Imaging Radiometer Suite (VIIRS) missions to provide vicarious calibration data to monitor and reference to satellite Level2 Reflectance (L2R) data. Both MOBY and BOUSSOLE (the CNRS, France optical moored buoy) provided this capability for MERIS, but there were few independent sites in deep blue, case 1 waters that are used for ocean colour validation. AMT therefore offers an excellent opportunity to conduct field inter-comparisons at these sites.

The AMT has an excellent heritage for ocean colour (OC) satellite calibration and validation. At IOC in 2014 and 2015, AMT was heralded as one of NASA SeaWiFS 10 greatest highlights and it was recommended this ocean observing platform be funded to provide vital calibration / validation data for future satellite missions.

AMT not only provided vital FRM data for the duration of the SeaWiFS mission but also served as a developmental and inter-comparison platform for selecting the most accurate ocean colour algorithm for SeaWiFS. Many of the early AMTs in the late 1990s were financially supported by NASA for the early pre- and post-launch work on the SeaWiFS. 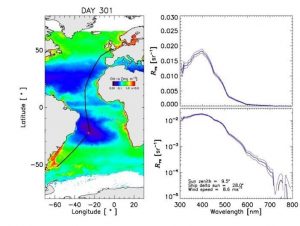 Figure 4-12. Hyperspectral remote-sensing reflectance (Rrs) data acquired using a HyperSAS radiometer at a station in the centre of the South Atlantic Gyre on AMT23.

The AMT-FICE will inter-compare the above-water measurements listed in Table 4-4., and the sensors and methods deployed by PML, JRC and RBINS (see Table 4-3.) along a 4000 mile transect in both productive and coastal waters as well as the clearest waters in the Atlantic Ocean and under Sentinel 2 and 3 swaths additionally allowing multi-sensor comparisons at the time of satellite match-ups. Uncertainty budgets on instrument calibration, measurement platform and measurement processing will be computed to ensure measurement traceability to NIST/NPL standards based on calibrations before, during and after the cruises. This will contribute to quantification of the errors in these FRMs and also in level 2 OLCI products in open ocean Atlantic environments.

The AMT-FICE will be conducted on AMT26 from 20 Sept to 05 Nov 2017 so that these initial ship-borne comparisons can be used to guide the main FICE at AAOT in 2018. The AMT-FICE will enable the consortium to develop knowledge of potential biases between measurements made by instruments under a range of operational and in water optical conditions. The AMT is costly and would be beyond the resources available to a single task and Lead within this ITT.

Organisation
How to reach, when, about location, accommodation and other practicalities