Inter-comparison of measurements between laboratories, who work on the accuracy of Copernicus Sentinel Ocean Colour and Sea Surface Temperature products, are an important component of quality checks of data collected in the field. Last year on the AMT4SentinelFRM Research Voyage, Plymouth Marine Laboratory (PML) carried out an inter-comparison exercise in collaboration with the EU Joint Research Centre, Italy on optical data collected on board the ship that is used for the validation of satellite Ocean Colour products.

On this year’s AMT4SentinelFRM Research Voyage, under the research project Fiducial Reference Measurements for Sentinel Ocean Colour (FRM4SOC), a further inter-comparison exercise is being carried out with The Royal Belgian Institute of Natural Sciences (RBINS) and Tartu Observatory, Estonia (TO) comparing long track and on station above water radiometric measurements using different optical sensors. Gavin Tilstone and Francesco Nencioli from PML have been joined by Quinten Van Hellemont from RBINS and Krista Alikas from TO on RRS Discovery to make these measurements. 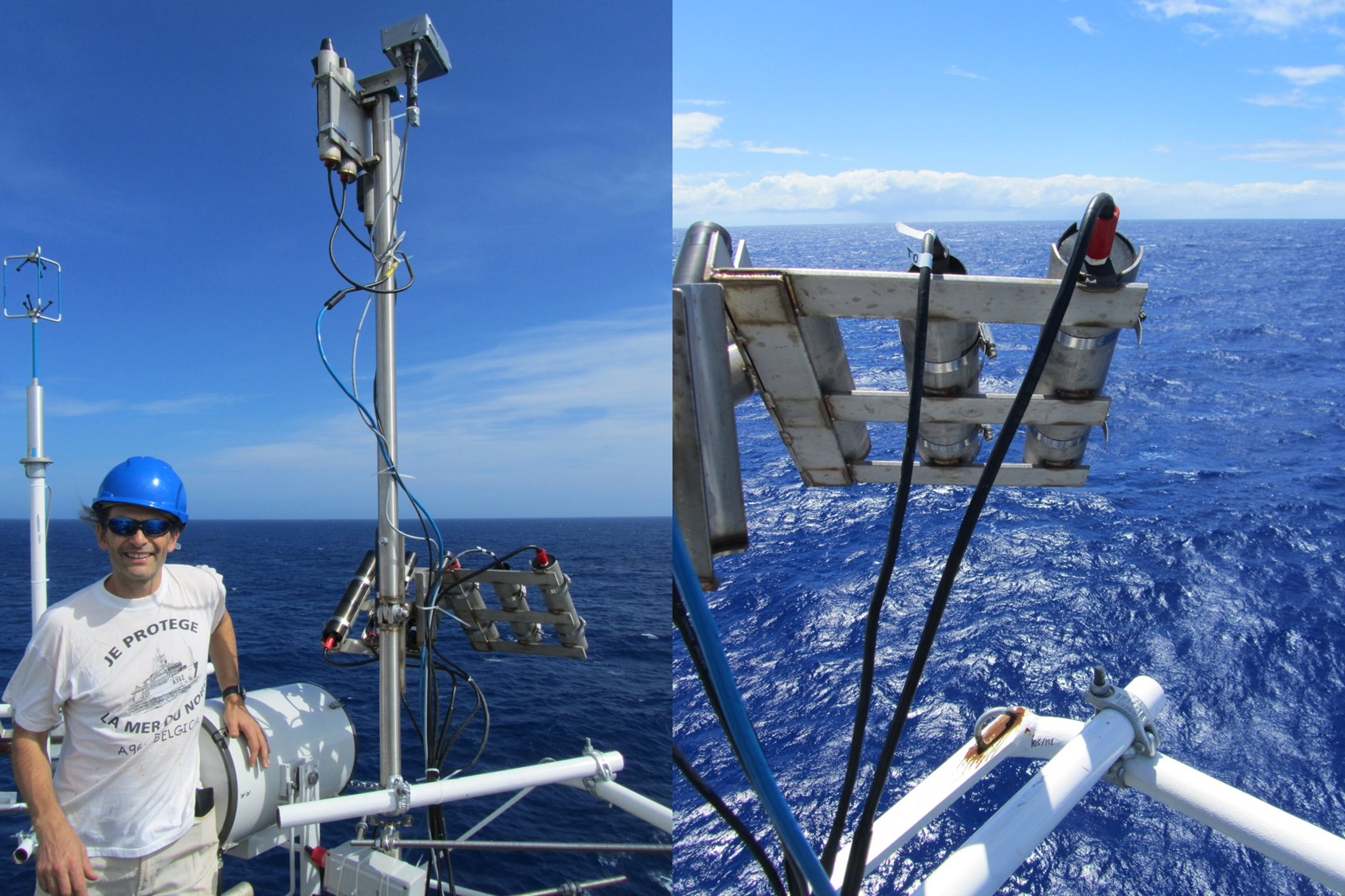 Left Hand Side – A purpose built stainless steel frame to locate all of the optical sensors at the same viewing geometry on the Met Platform of RRS Discovery. Right Hand Side – The sensors have an unimpeded view of the surface of the ocean and look at the same patch of water.

Fiducial Reference Measurements are independent sea surface measurements that provide confidence in satellite data products, through independent validation of satellite measurement uncertainty during the satellite mission. For Ocean Colour, optical sensors are used which are designed to retrieve the spectral distribution of upwelling radiance just above the sea surface, which is what is measured on board the Sentinel-3A satellite. The upwelling radiance is then used to estimate the chlorophyll-a concentration as a proxy of phytoplankton biomass to provide global coverage of marine micro-algal blooms. The PML team are using optical sensors manufactured by SATLANTIC in Canada and the RBINS and TO teams are using sensors manufactured by TRIOS in Germany. These sensors are similar in design, but there are subtle differences between them. The inter-comparison helps to understand the effects of different instrument design on the upwelling radiance measurements that are made, which helps to provide confidence in the data collected by both sets of sensors.

A fish eye camera looks upwards to produce a photographic log of the sky conditions. Left Hand Side – Quinten Van Hellemont from RBINS and Krista Alikas from TO and Right Hand Side – Gavin Tilstone and Francesco Nencioli from PML clean the optical sensors daily.

To facilitate these comparisons, PML designed a purpose built stainless steel frame to locate all of the optical sensors at the same viewing geometry so that they receive upwelling radiance from the same patch of water. Prior to the research voyage, the steel frame was bolted to the rails of the met platform on RRS Discovery, from which the sensors have an unimpeded view of the surface of the ocean. Each institute uses three optical sensors; one that measures the radiance of the sky, one that measures the radiance from the water in front of the ship and a third that points directly at the sky and measures the sky downwelling irradiance. The sky and water radiance sensors are positioned at 40 and 140 degrees from zenith. A tilt and heading sensor is used in conjunction with the sensors to provide GPS position and angle of the sensors with respect to the motion of the ship. Krista has also installed a fish eye camera that looks upwards to produce a photographic log of the sky conditions. These images are used as quality control check on potential match-up scenes with the Sentinel-3A satellite. The instruments are connected via a junction box and data is transferred through a mini deck unit to a laptop in the met laboratory. Each day at approximately the time that the Sentinel-3A satellite is orbiting over-head, the ship is stopped and located at a 90 degree angle from the sun. This ensures that there is no direct sun glint shining onto the sensors. A series of measurements are then logged for 10 seconds over an hour period to collect essential data to sea-truth the satellite measurements.

Data from the optical sensors are transferred through a mini deck unit to laptops located in the met laboratory.

By deploying the sensors on the The AMT4SentinelFRM research campaign on the Atlantic Meridional Transect (AMT), a comparison of the sensors is achieved continuously along track measurements between the UK and the sparsely sampled South Atlantic along a 7000 mile track. The Transect covers several ocean provinces in the North and South Atlantic Gyres, and also the productive waters of the Celtic Sea, Patagonian Shelf and Equatorial upwelling zone, which therefore offers a wide range of variability in which to conduct the FRM4SOC inter-comparison exercises. There are few sites in the blue water oligotrophic gyres of the global oceans that are used for validating satellite data, because of the cost of accessing and maintaining measurement platforms in such remote locations. This research voyage provides a fantastic opportunity to conduct both field inter-comparisons at these sites and, at the same time to validate Sentinel-3A products using different ship based sets of optical instruments. PML, RBINS and TO made continuous measurements for 9 days from the UK to the Azores, where Quinten and Krista disembarked. Krista left the TO sensors on-board the ship so that a comparison with the PML sensors could be carried out all the way down to South Georgia and the Falkland Islands.

The AMT was started as a program for determining the accuracy of ocean colour satellite data and provided vital validation data to evaluate the accuracy of the NASA SeaWiFS mission and for the development of ocean colour models of phytoplankton biomass. Many of the early AMTs in the late 1990s were financially supported by NASA for the early pre- and post-launch work on the SeaWiFS. For the past 2 years, the validation of Copernicus Sentinel Ocean Colour, Sea Surface Temperature and Ocean Dynamics products is funded by the European Space Agency to provide confidence in the satellite data products that will be used to monitor the ocean for the next 20 years.